It never ceases to amaze me how people with some of the worst reputations have no qualms in asking someone to vouch for them.

At some point in your life, many of you have been asked to provide a reference letter for a friend or former colleague. You didn’t want to do it, but you did it anyway because you didn’t want to hurt their feelings. So, you sat hunched over your computer trying to come up with all the reasons you feel that person should be hired.

Let me tell you why that’s a bad idea. Providing a reference for someone who is not deserving of your adulation is probably one of the worst decisions you could make. Firstly, it’s a lie. Secondly, you are not giving a company a fair chance to eliminate a poor candidate and thirdly and most importantly, you’re putting your own reputation on the line.

Tony Montana once famously said, “all I have in this world is my balls and my word and I don’t break ‘em for no one.” Tony had a point, albeit a grammatically incorrect point.

I would rather give money than to give a bad job seeker a reference letter because my word means too much. Signing my name to something means too much.

A young man who has been fired multiple times for stealing, or as Bahamians say, t’iefing, had the nerve to ask me for a reference letter. Now, given the chance, this man would t’ief Jesus off the cross, but he wanted me to give him a recommendation and then sign my name to it. Uh, it’s a no for me, dawg. 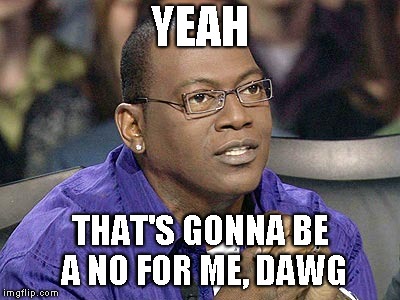 The one and only, Randy “That’s A No For Me, Dawg” Jackson.

I thought to myself, if I recommend him and he steals from this job (as I suspect he will), the HR managers would question my integrity. Well, despite my denying him a reference letter, he landed the job and guess what? He was fired. For what, you ask? Stealing. Sorry . . . t’iefing.

There are times when people you barely know will ask you for reference letters. Sure, you’ve worked with them, but you don’t really know them. A young lady who was interning at my old job spent two days with me and figured we knew each other well enough to ask for a reference letter.

She seemed professional and polite. I wanted to help her, but couldn’t because I did not know her. Two days was not enough time for me to learn her work ethic and see how she responded under pressure. So, I told her that I would not be the best person to do that. She understood.

Stick To The Basics.

If someone you know insists on receiving a reference letter from you and you absolutely do not want to hurt their feelings by saying no, stick to the basics. Keep the letter very straight to the point. Any HR manager worth his or her salt will be able to read between the lines. But, sometimes, you’re put in situations without your knowledge.

A subordinate who was repeatedly disrespectful to me and other managers had the nerve to put me down as a reference. When the HR manager called me to find out about this perspective employee, I totally ignored the questions being put to me and would only confirm details. I would say, Employee X worked here during this time period, Employee X was responsible for this and that, etc. When the manager finally caught on, she asked one final question: Would you rehire Employee X again. My response: absolutely not.

Sometimes, you just have to go missing in action. If you don’t like confrontation or simply don’t want to be bothered, just don’t respond. They’ll get the message.

My sister, who is as gangster as they come, will disappear into thin air if an unscrupulous character asks her for a reference. You need that letter by tomorrow? She will go missing for a month. Her phone would suddenly “crash” and she ain’t answering unknown numbers.

Whatever tactic you decide to use, don’t put your good name on the line for people who don’t deserve it.

Hold Up. Weight A Minute

Because I work in media, people often ask me to endorse things, some even ask me to invest.

A company owner once tried to convince me to invest in her weight loss program. During her sales pitch, I found myself examining every inch of her 300-pound body. She tried to convince me that her program would give me a good return on my money and was highly effective, as she had experienced “great results.” Firstly, separating me from my money is no easy feat, so, that was already the first hurdle she had to overcome. Secondly, seeing is believing. And what I was seeing, I couldn’t believe.

I eventually told her that I was not interested in that type of investment and, in a very gentle way, told her that I did not think she was an appropriate spokesperson for a weight loss product. She politely informed me that she started her company from the ground up, it was her money and her idea, so she would be the spokesperson and if I didn’t want to get involved, that was my loss. Even if I wanted to, I couldn’t attach myself to her or her product. You know why? Because all I’ve got in this world is my balls and my word and I don’t break ‘em for no one.

I dedicate this column to my aunt, Claudia Pedican, who recently passed away. She was the sweetest human being in the world with a wicked sense of humor. I will miss watching Bewitched and the Dark Shadows soap opera with you, Auntie Clee. I love you so much. Go live your best afterlife, gyal.