Wake Up And Smell The Marijuana

Wake Up And Smell The Marijuana

Don’t be stupid and jump on this “decriminalize marijuana” bandwagon because for a lot of you, you’re about to go out of business. (Add this to the list of things I never thought I’d tell a drug dealer).

There seems to be a lot of groundswell to decriminalize medical marijuana. Naturally, the loudest voices are the proponents – most of whom are apparently suffering from chronic back pain so severe that it can only be healed through weed.

The medicinal benefits have been stated. But, not one word has been said about how this is going to affect you, and most importantly, your employment.

For years, you cornered the market. Your biggest competitor, Razor, King and Vado. If the government allows Bahamians access to medical marijuana, you may be facing an even bigger foe, Lowe’s. And at least at Lowe’s I could shop for Monistat and nail polish remover while getting my weed prescription filled at the counter. Unfortunately, you can’t offer that. So, unless your joints come with a pap smear and a quick nail polish change, you’re in for problems.

The decriminalization of le cannabis is going to force you to get creative. The problem is, if you push other narcotics and get caught, the police will arrest you because Caricom ain’t establishing no commission to decriminalize cocaine. I know. I called them.

Bahamians already know which doctors to go to when they need a sick slip. I’m sure they won’t have an issue finding one to write a weed prescription for their dry skin.

If the government allows weed to be used for medicinal purposes it will, in essence, legitimize recreational use. Then, you’d better believe full legalization will follow shortly after that.

The drug boys need only talk to the number boys to see how legitimacy is working out for their business. I’m sure if many of them had their way, they would have remained underground, pocketing all of the profits and not having to pay VAT on a sliding scale. The point is, being legitimate ain’t always good for business and there are always casualties.

It might make sense for you and your cohorts to vote against any measure to decriminalize marijuana. Gather your fellow dealers for a summit and plan the way forward. This is not the time for disunity. This is time to figure out how you will continue to conduct business in a post decriminalized environment.

You’re going to have to push harder than you’ve ever pushed before. Challenges always give rise to opportunities. This could force you to diversify your offerings. You may have to shift your focus to something equally as seedy, but with a little more sustainability. Something with a strong customer base. Something you can’t get at Lowe’s. I have some ideas, but I can’t give them away.

Remember, Rogan cares if don’t nobody else care.

You Win Some, You Lose Some

So, I’m sure you’ve probably heard by now that I didn’t win the Icon Award.

That distinction went to my friend and colleague, Jerome Sawyer.

Y’all have to give it to me, though. I predicted he would win. Now, if I could only dream up a few numbers I would be on my way. He gave a terrific speech. Mine would have been petty.

When I spotted him on the red carpet, we locked eyes and he burst out laughing. His laughter, no doubt, was a thinly veiled attempt to hide the internal terror he was feeling.

My player hater mother, who was my date for the night, actually pointed Jerome out. I didn’t know if she was secretly admiring him and his purple ensemble from a distance or if she wanted to kill him. After she sucked her teeth and said, “what he doing here”, I knew it was the latter. I have to say, this was the first time she was actually in non-hater mode. At least towards me.

I know many of you tuned in to see if I would interrupt Jerome’s acceptance speech. Even Jerome later admitted that he stalled on the mic in hopes that I would. But, there was one problem. My dress.

I was so busy worrying about my footwear being comfortable that I didn’t consider the fact that my gown might have rendered me immobile.

I was wearing the kind of dress that allowed me to stand once and sit once. That’s it. During the show’s opening, I was praying that they didn’t start off with the national anthem, because I wouldn’t have been able to stand. I couldn’t bend to pick up my drink – nothing.

So, by the time the media category was announced and Jerome declared the winner, I couldn’t move if I wanted to. Besides, I don’t know if y’all know Jerome, but he like fight! So, I had no doubt we would have scrapped on that stage. 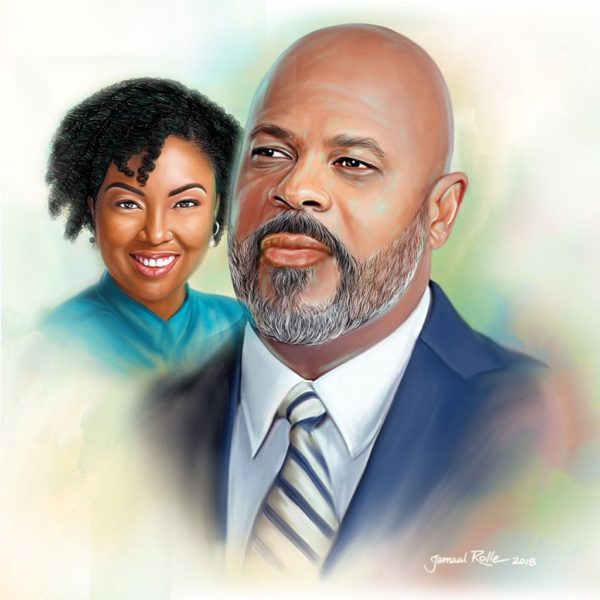 An artist rendering of me and my radio co-host, Ed Fields.

Before I go, my friend and radio partner, Ed Fields read my last column and was shocked that I didn’t mention him in my pretend acceptance speech. I didn’t do so because he too like take credit for people’s success. Talking ‘bout I wasn’t funny until I met him. Anyway, I want to publicly do so now. I thank him for never being selfish with his knowledge and for always making me laugh. He’s such good friend that he is not even acknowledging that Jerome won. Hey, that’s what friends are for. Even if they’re delusional.